I help drummers everywhere! I’ve been a professional drummer, percussionist, and drum educator for over 40 years. Following Juilliard, I’ve taught some of the best drummers on the scene today as well as beginners and professionals of all ages.

Whether you’re a beginner or a longtime player who just needs some brushing up, I can help. And I love doing it! Making drummers better at what they do is my life’s work.

I am the creator and patent holder of the HINGESTIX Practice Drumsticks, a learning tool that helps drummers feel the rebound, develop finger technique, hold the drumsticks properly, feel the whipping motion of the Moeller technique, and understand proper fulcrum (that important balance point of the drumstick).

So once again, welcome, and let’s get started!

Sam Ruttenberg has been named one of the world’s best teachers in Modern Drummer magazine.

With a background in both drum set and percussion performance, Sam Ruttenberg has
performed with artists Dave Brubeck, Count Basie, Lionel Hampton, and Lena Horne, among many other stars and recording artists. He has performed with the Pennsylvania Ballet, the Opera Company of Philadelphia, Orchestra 2001, Salute to Vienna Orchestra, and the Philly Pops. He is also an active drum set clinician, presenting clinics in the United States, Europe, Ukraine, and South America. Sam has toured and recorded with the Houston Symphony, Ballet, and Pops Orchestras, and has performed at Carnegie Hall, Lincoln Center, Radio City Music Hall, and the Kennedy Center.
Sam’s students include Justin Faulkner (Branford Marsalis) and Shakoor Sanders (Tim
Warfield, Wallace Roney). He has given lessons to John Roberts (Janet Jackson), Shirazette
Tinnin (Tia Fuller), and taught a drummer in Paris who made the move to Philadelphia to
study with Sam at the University of the Arts in Philadelphia. Sam has also taught students via
Skype in Finland, France, Portugal, Ukraine, and Singapore.
Many of Sam’s students perform in the Sinfonia Youth Orchestra of Philadelphia, the
Philadelphia Youth Orchestra, the Kimmel Center Jazz Program, as well as the All South
Jersey and NJ All State, and All National Jazz and Concert Bands. One of Sam’s students
recently won top high school timpanist in the United States in the NAFME All American
Orchestra as well as winning first place in all 3 categories (snare drum, keyboard percussion,
and timpani) in the All South Jersey Band and Orchestra.
Sam teaches (since 1994) at the Settlement Music School in Philadelphia and has taught at
Camden County College, and Rutgers University Camden. Sam is also on the board of the
Professional Drum Teachers Guild, and was named one of the top drum teachers worldwide
from Modern Drummer Magazine in “Dom Famularo’s Teachers List” (Modern Drummer
November 2015).
Sam has written articles for PAS Percussive Notes and Modern Drummer Magazine. Sam was
a longtime student of Joe Morello, and transcribed and worked closely on the creative aspect
of his Master Studies II book. Sam also wrote his own book entitled “Drum
Tips” (HoneyRock 2009).
Sam also created the HingeStix® practice drumsticks, a learning tool that teaches drummers
the free stroke rebound, finger technique, proper grip , and double and buzz stroke roll. The
HingeStix won BEST in SHOW at NAMM 2011.
Sam received a Bachelor’s Degree from the University of Miami, a Master’s Degree from the
Juilliard School, and has endorsements with Sabian, Vic Firth, Remo, and Ludwig.

“My son progressed to a level where he was no longer challenged by local instructors. In his first lesson, it was obvious that Sam has the knowledge, skills and experience to take my son “to the next level” and beyond. Sam continues to demonstrate a sincere interest in my son’s progress and success in his performances, rehearsals and auditions; and always made sure my son was prepared for them. In addition, Sam looks for new opportunities for my son to further his development and, he was instrumental in helping my son be a part of several advanced-level Jazz ensembles. Although an hour’s drive from our home, lessons with Sam Ruttenberg are well worth the trip.”

“I do not only consider Sam Ruttenberg to be the best teacher and drummer I have personally known, but also one of the best friends and mentors I have ever had. I have taken lessons from him for roughly 7 years, and known him much longer, and I can honestly say I have never left a single lesson without feeling more and more excited to come back the next week. I’m certain that as my life moves in different directions, as long as I’m within reach, I’ll make sure to pay him a visit for the occasional lesson, just as a way for us to catch up.”

“Our daughter has only been taking lessons with Sam for a few months but, in that time, her skills have grown by leaps and bounds. Her school band director considers her to be the best drummer in the school, nominating her for the “All South Jersey Band” and “All Cherry Hill Band” which she has participated in. Sam’s lessons go beyond just music, he teaches her not to accept being “the best Girl Drummer, but to be the best Drummer!” Sam has a very caring and nurturing style that drives his students to push harder. When the time comes for our youngest child to start with lessons, the only choice for us will be with Sam.”

“My teenage daughter starting lessons with Sam a year ago, with no prior drumming experience. Not only is he an excellent professional drummer, but his warm, patient, and encouraging manner makes him the perfect teacher. He has taken her through all the drum rudiments and put her on set with the very first lesson. Her progress has been amazing! And most importantly, she looks forward to her lessons every week! Sam is a wonderful teacher.”

Lessons are conducted in my drum studio.You will learn from the best instructional books including:

"STICK CONTROL" and "ACCENTS AND REBOUNDS" by George Stone.

“PORTRAITS IN RHYTHM” by Anthony Cirone.

Drum set skills for coordination and independence using "SYNCOPATION FOR THE MODERN DRUMMER" by Ted Reed. 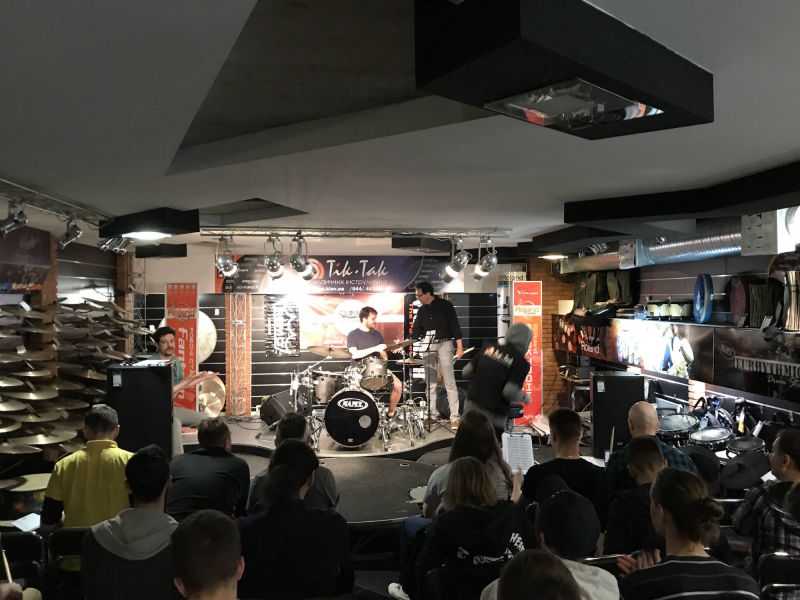 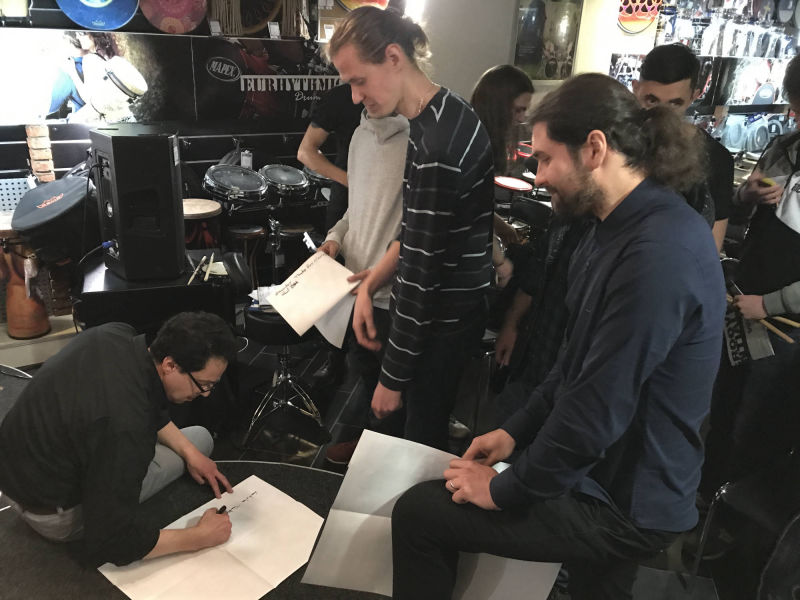 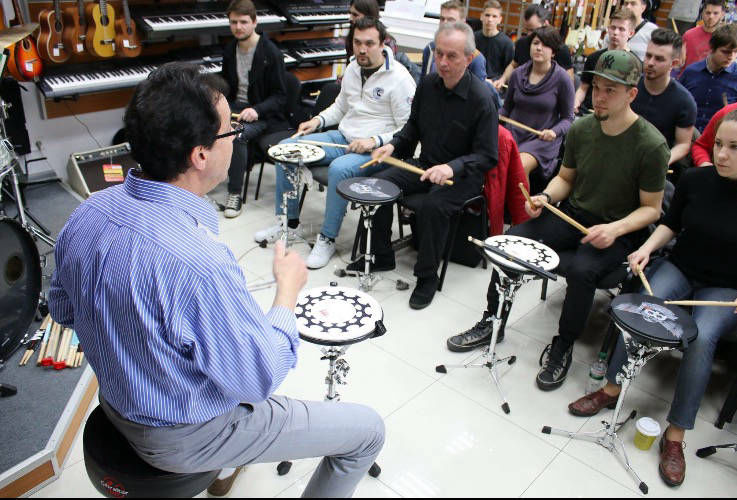 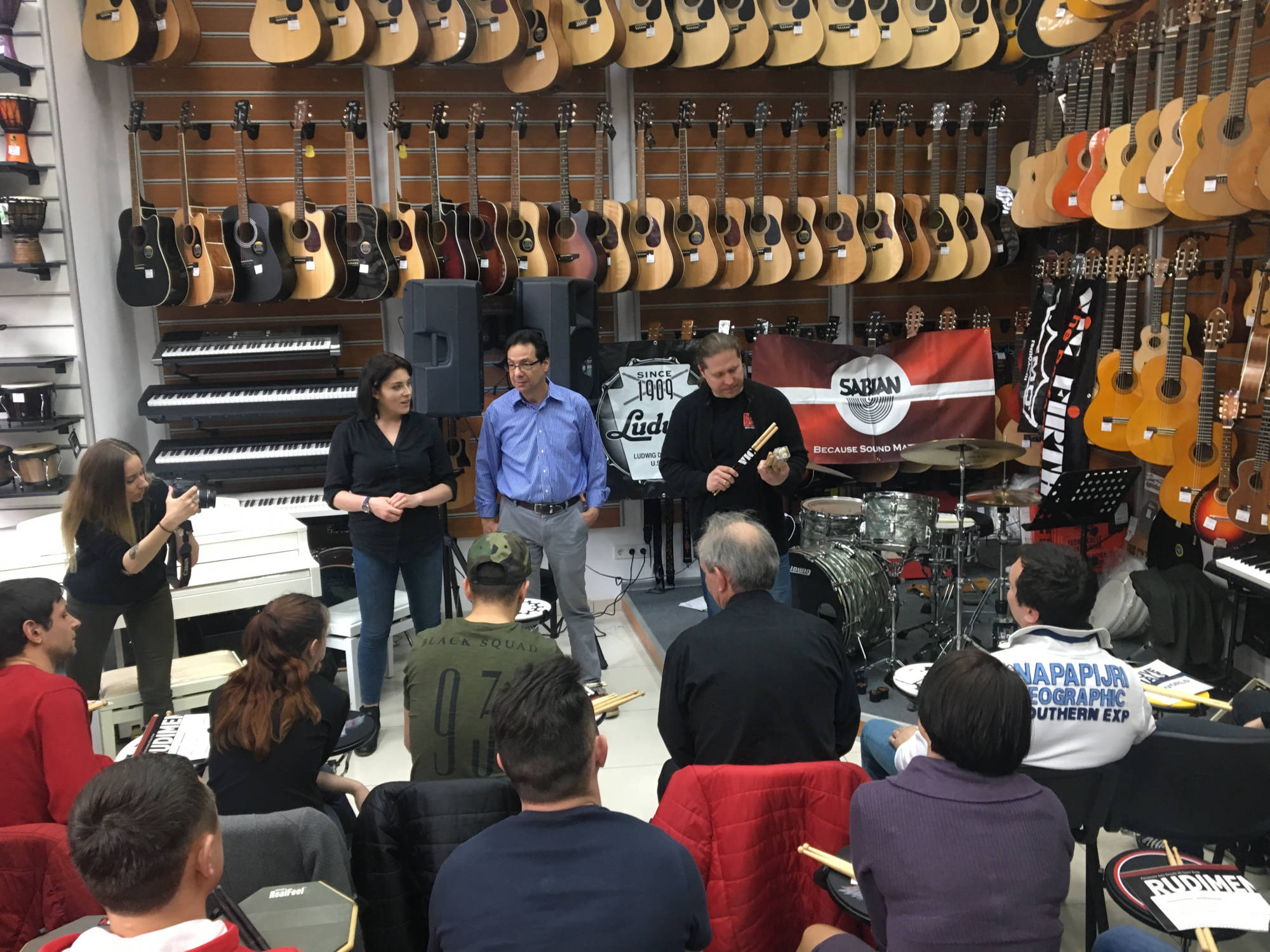 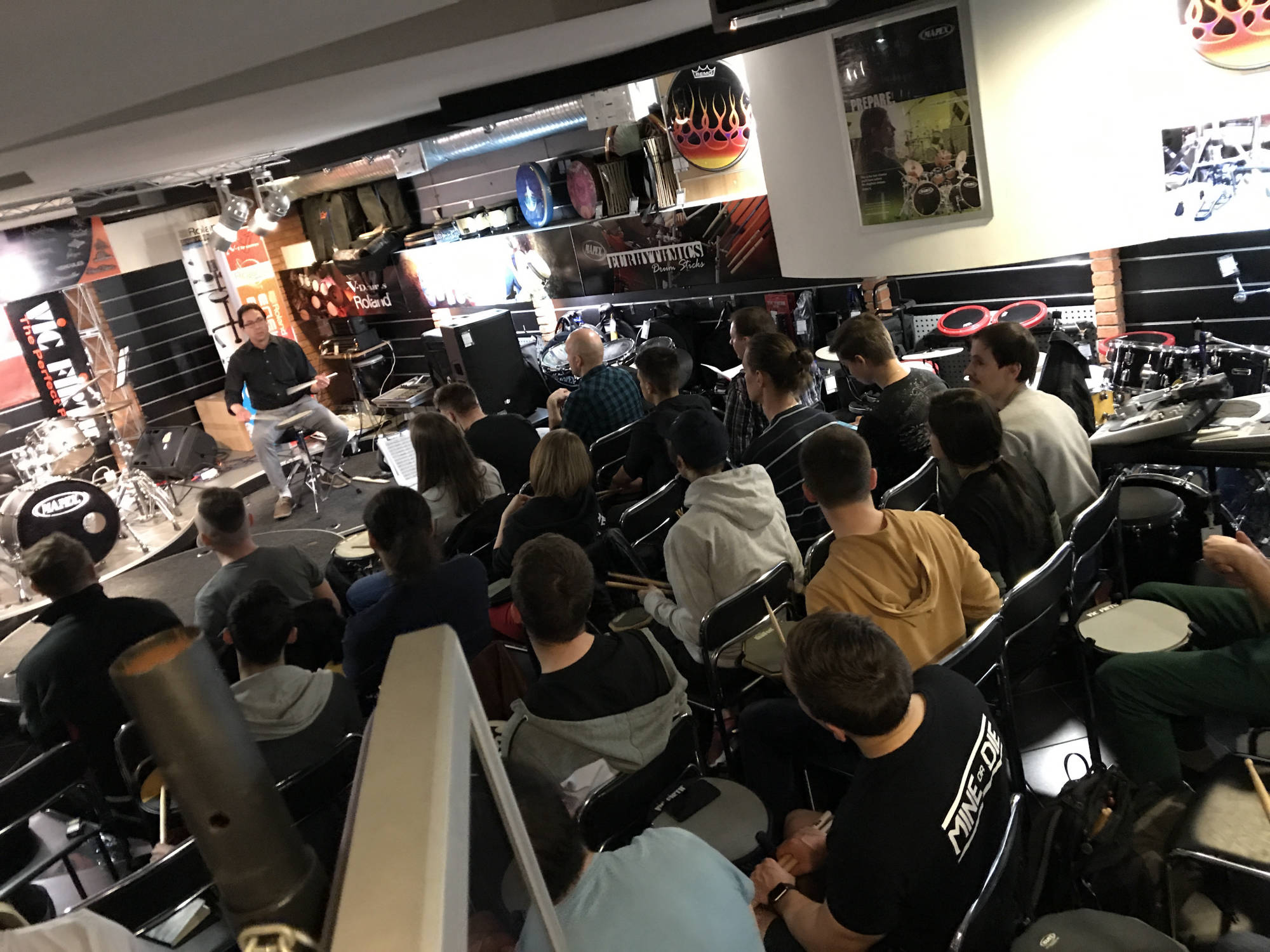 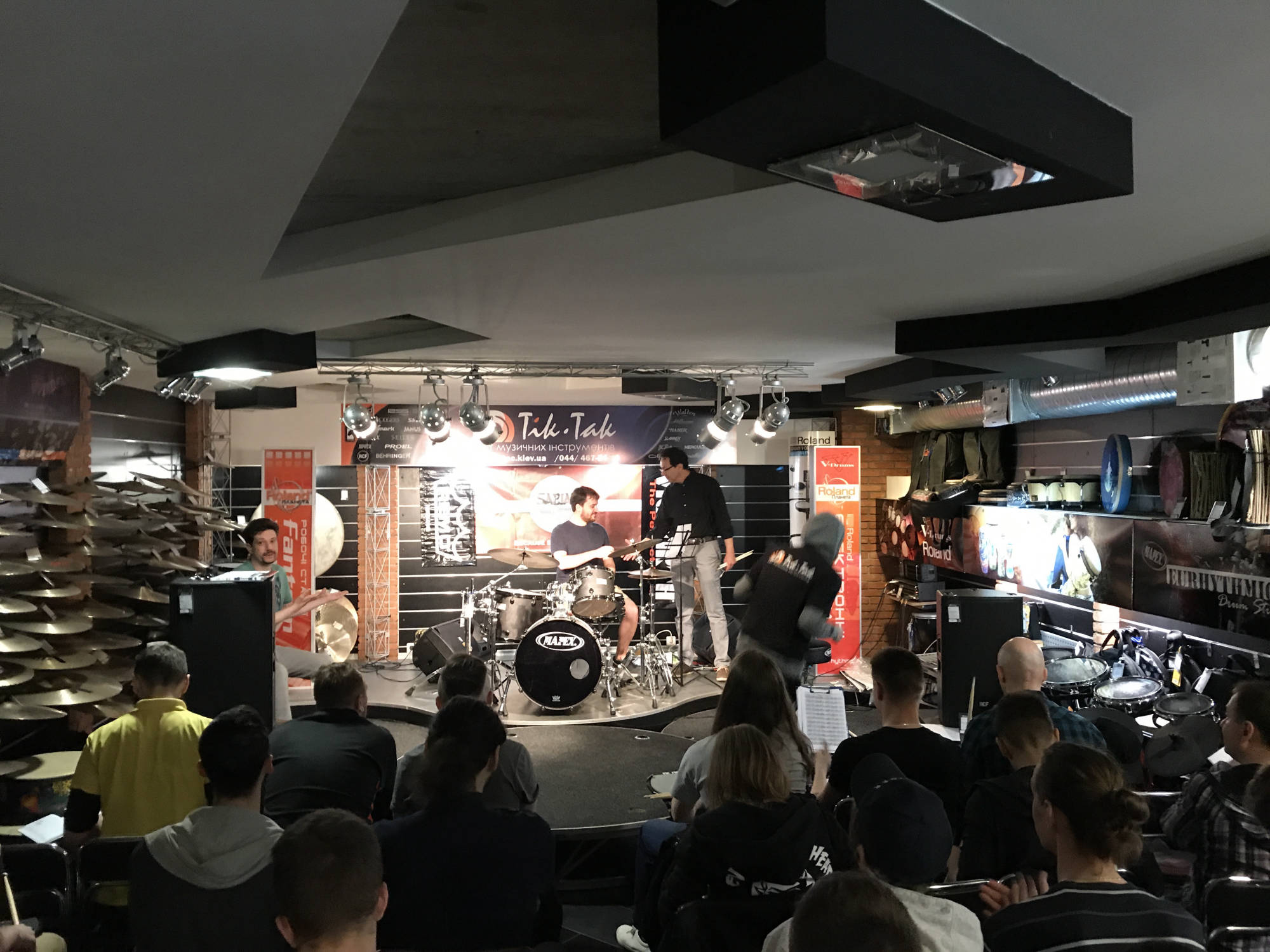 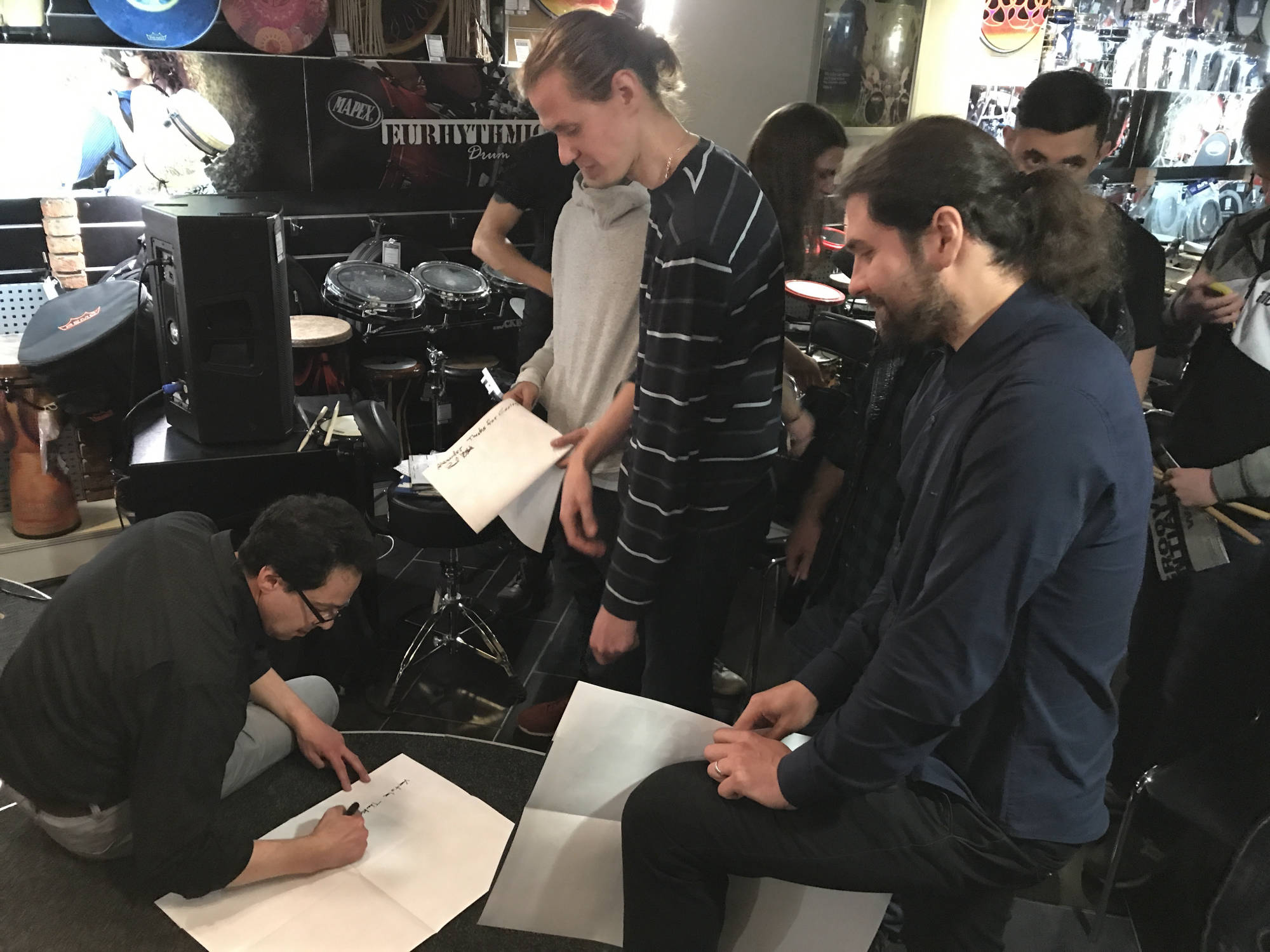 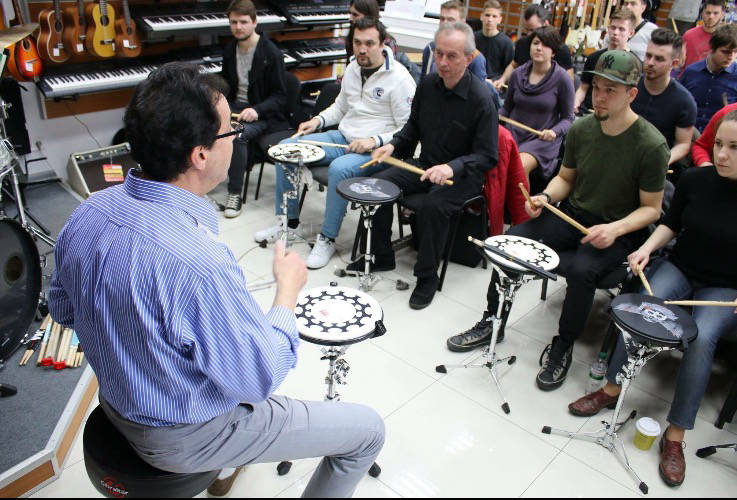 Master Classes in Ukraine and Russia 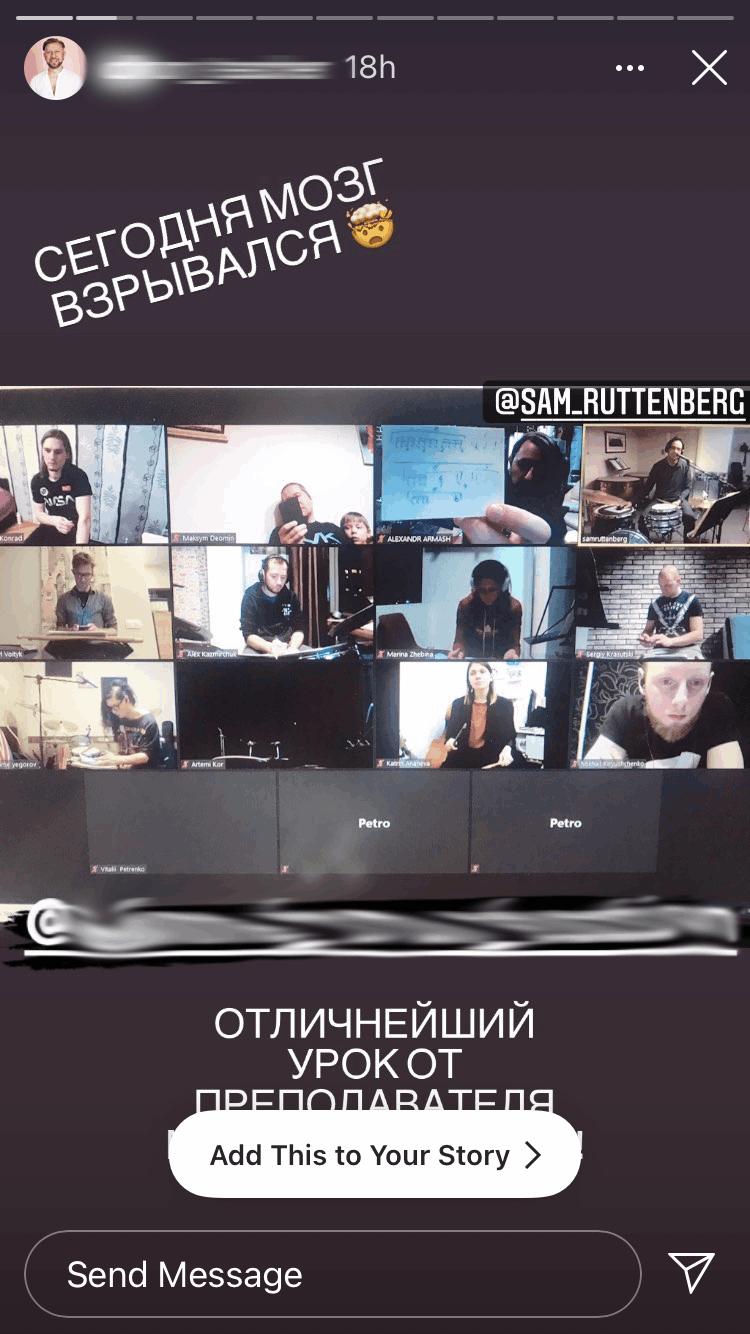 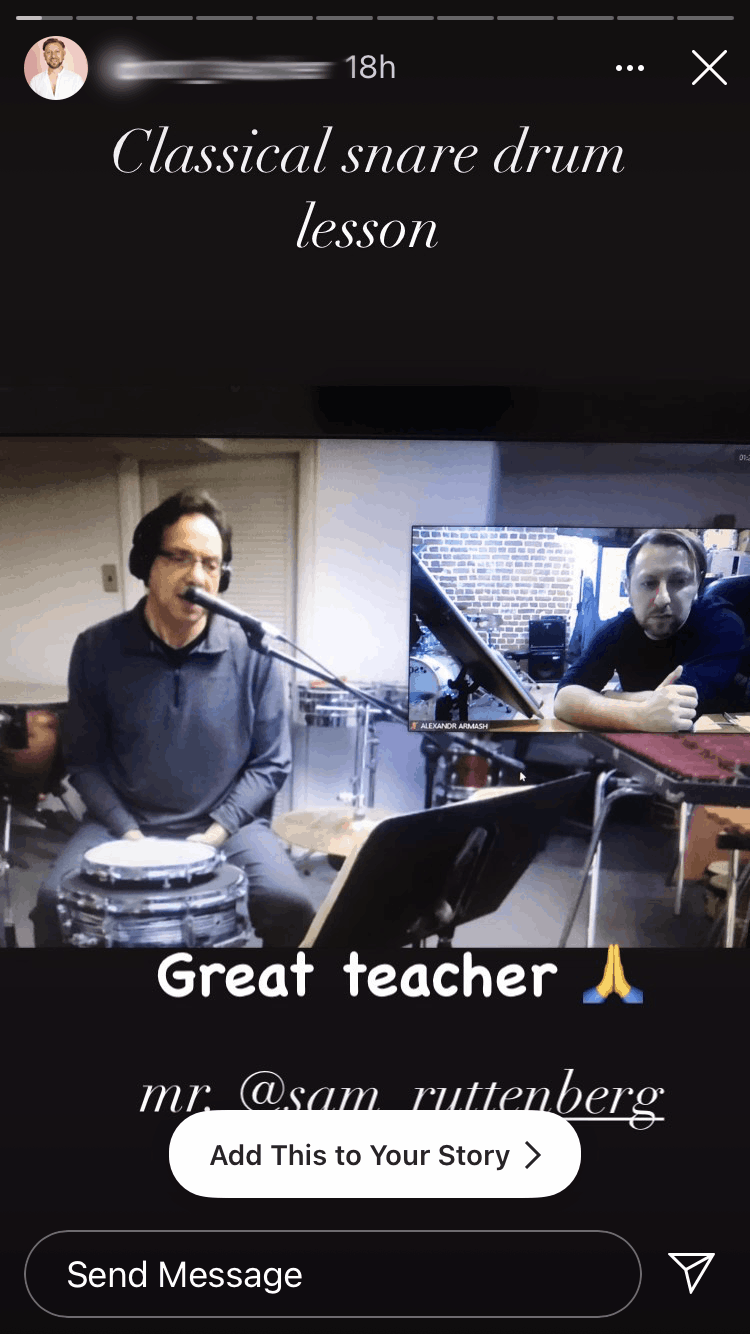 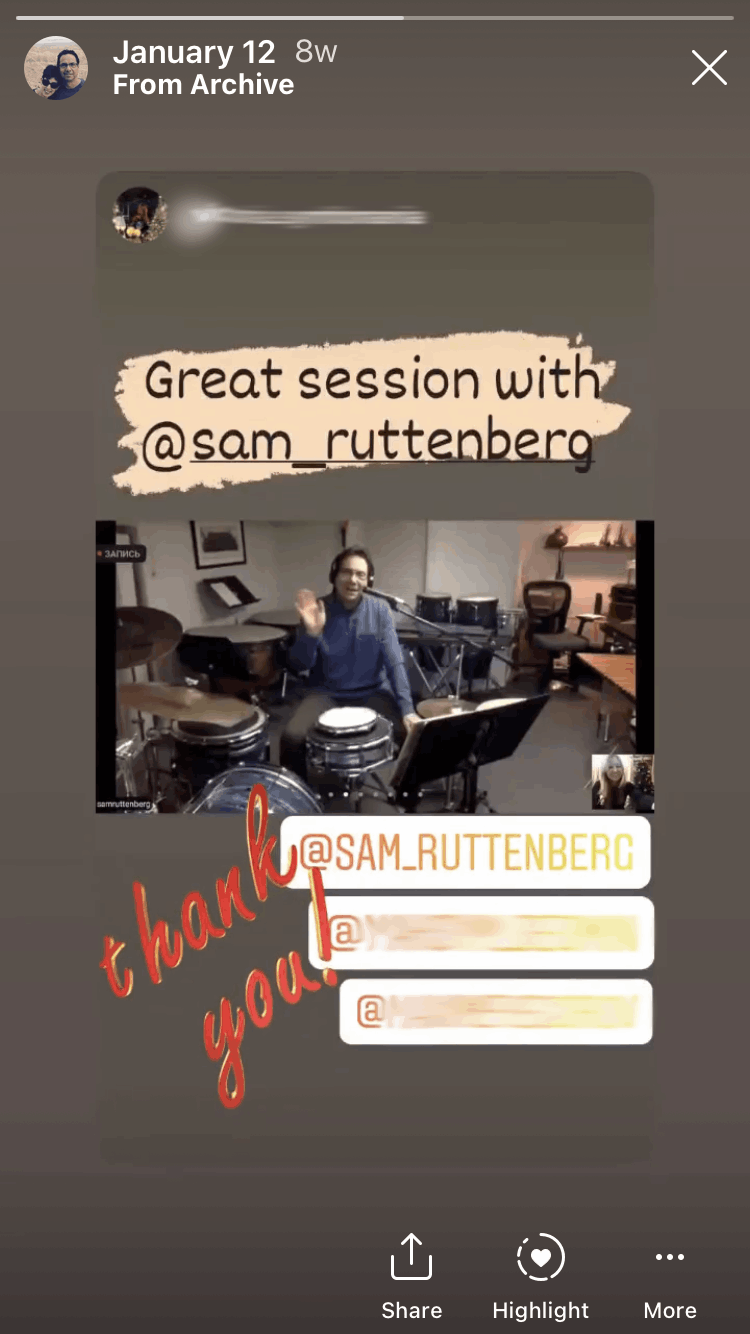 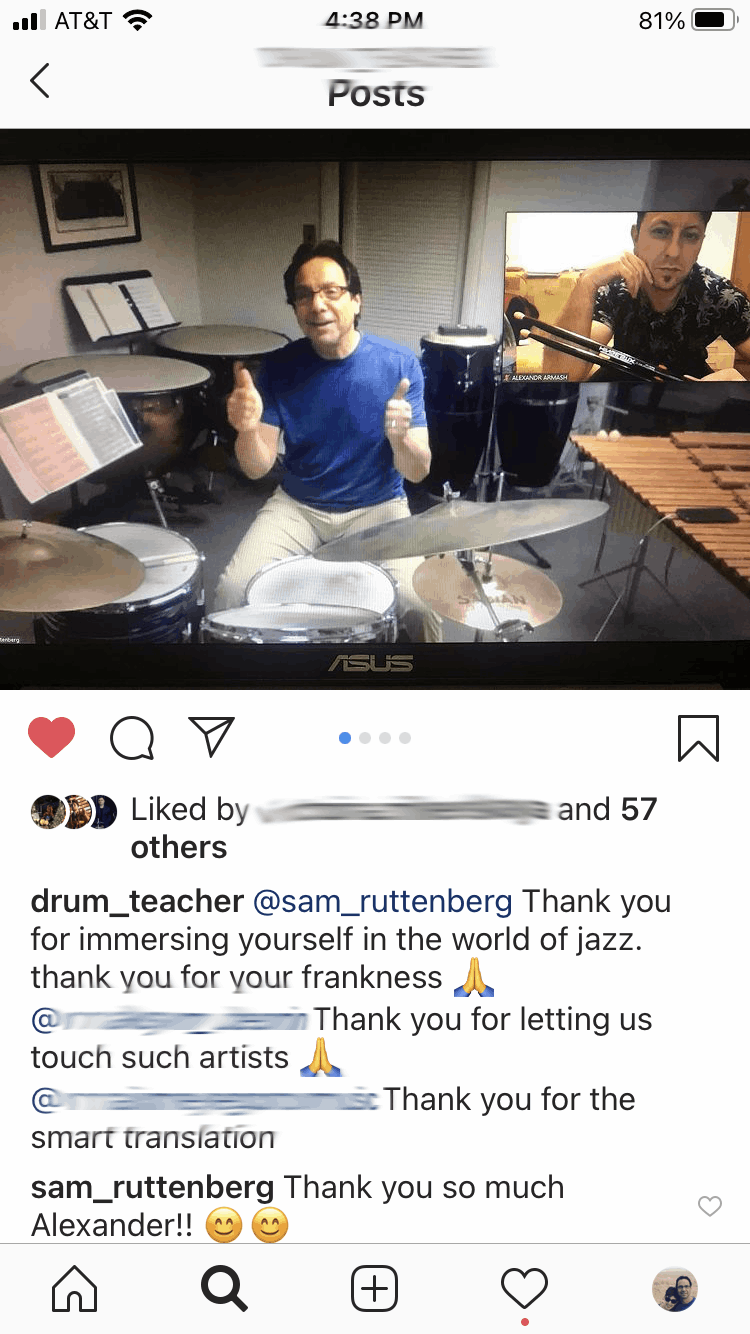 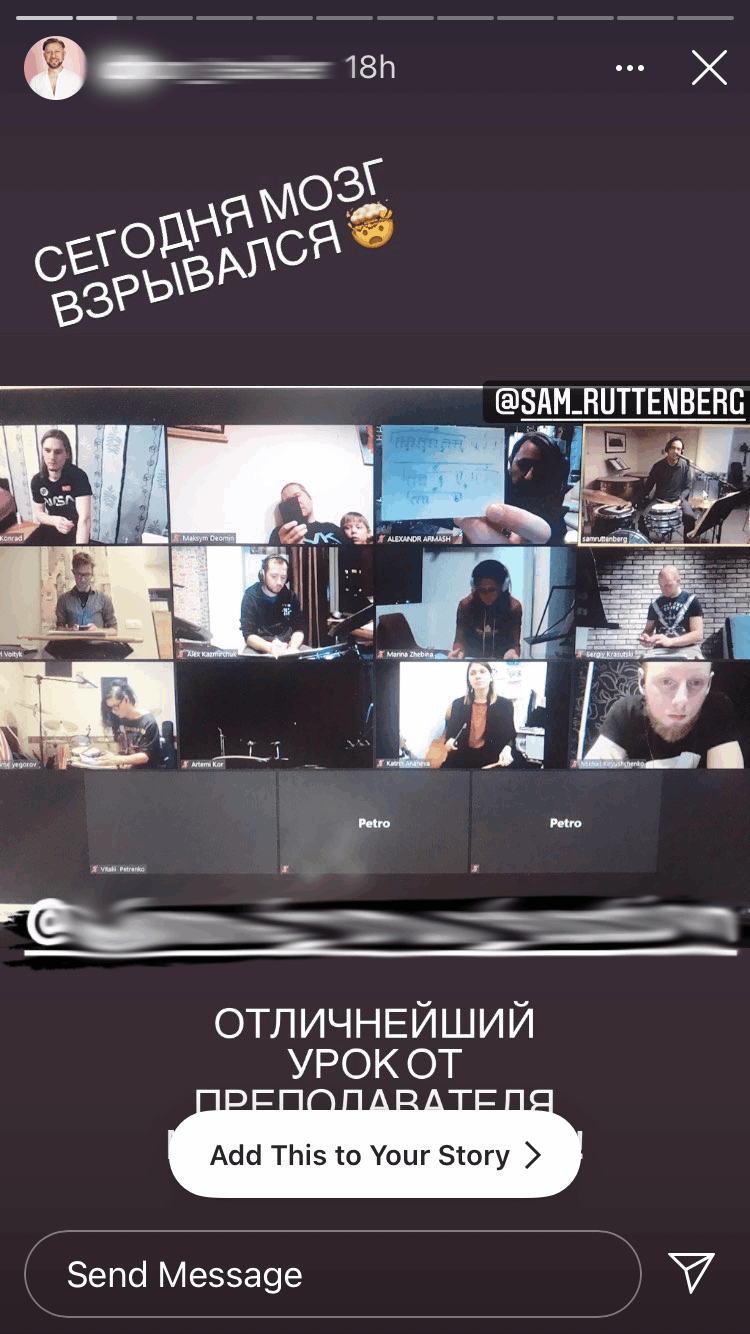 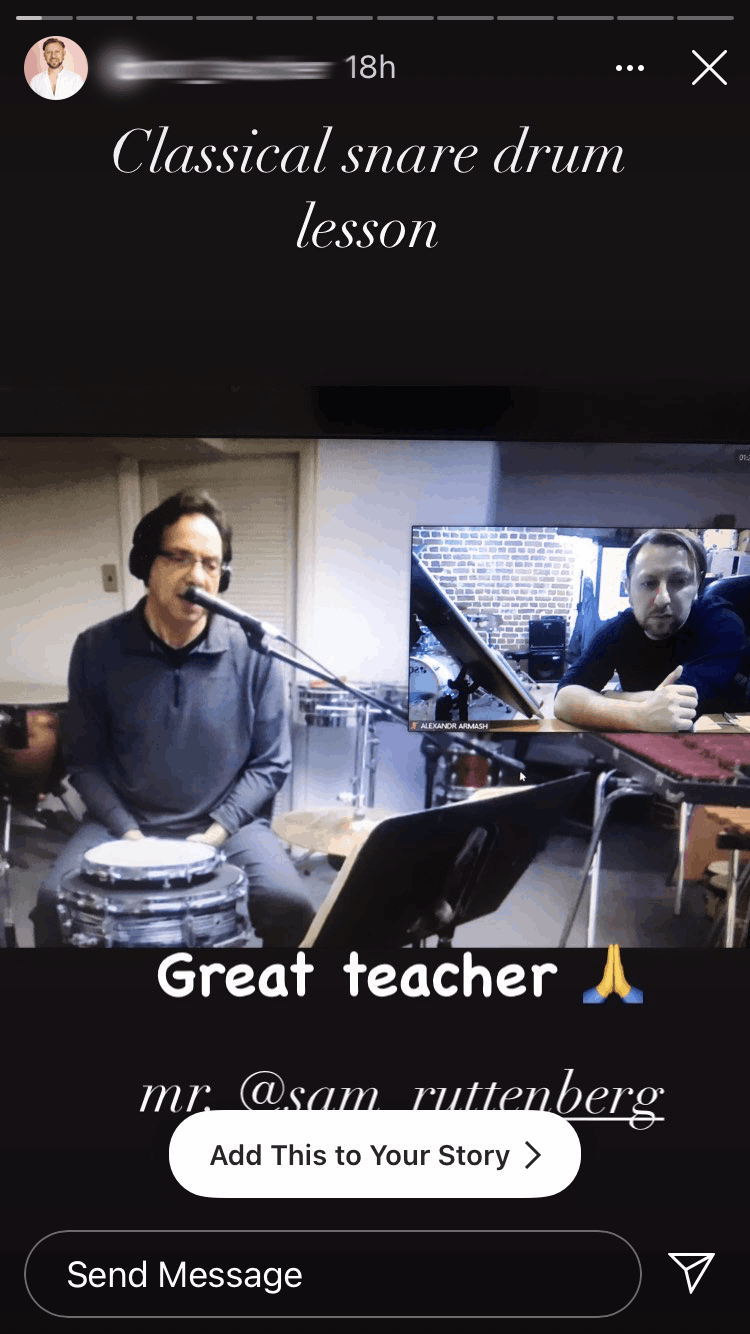 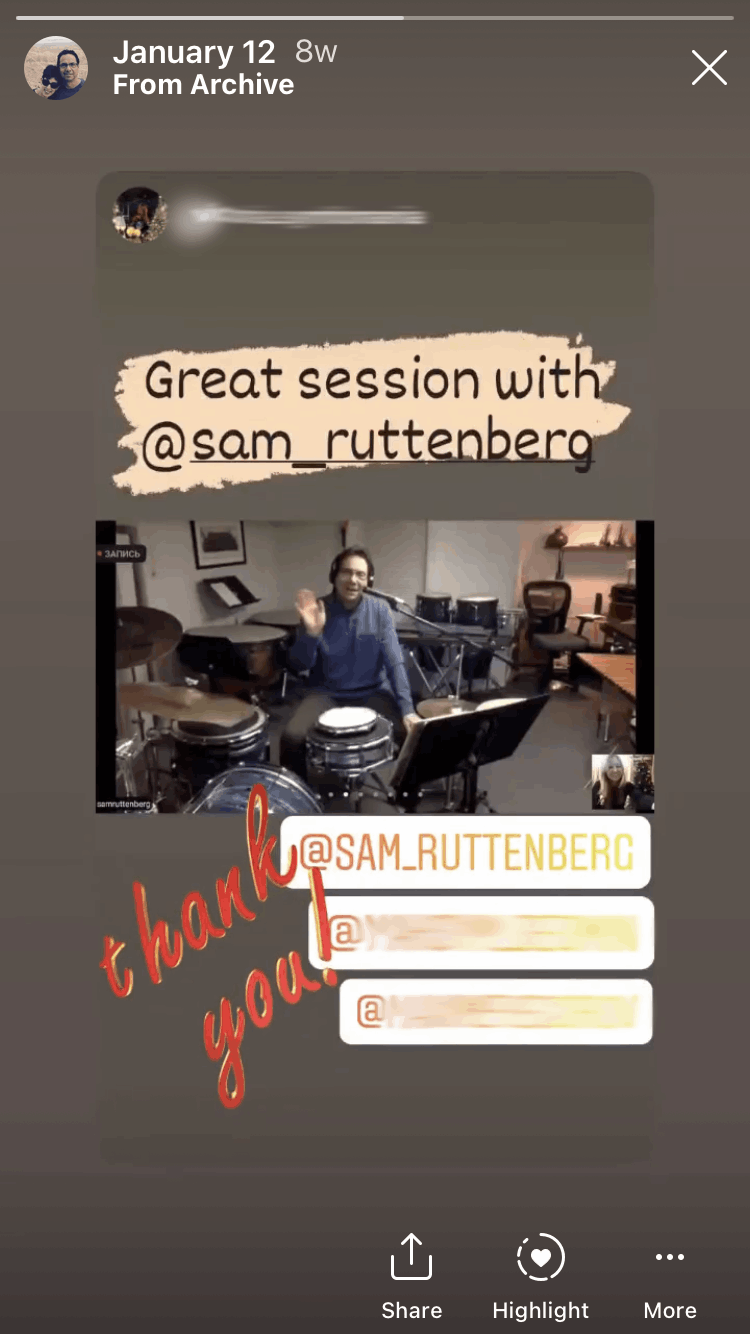 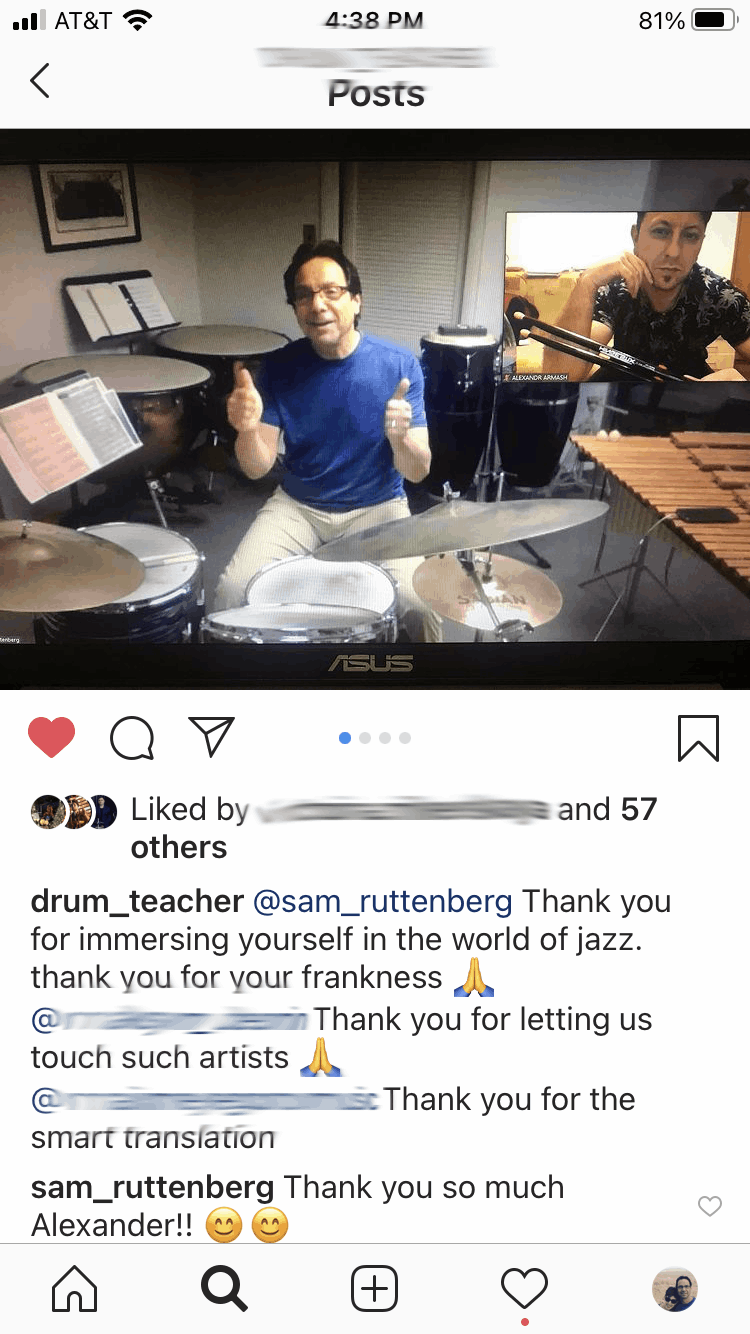 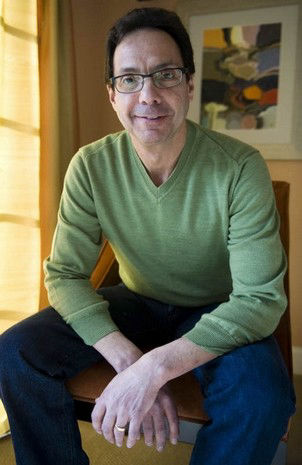 DROP ME A MESSAGE

Thank you. I will respond shortly.

Take lessons with me in-person at my studio or over Skype.